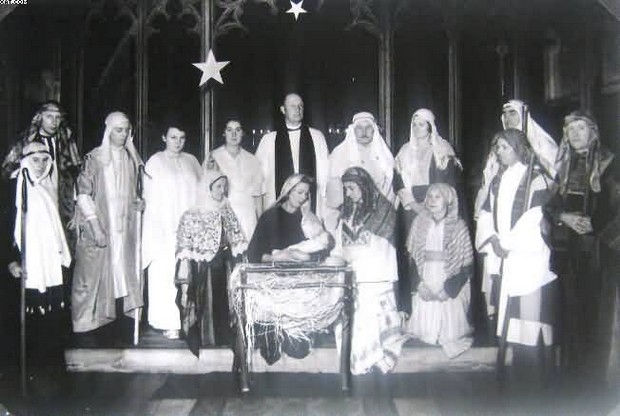 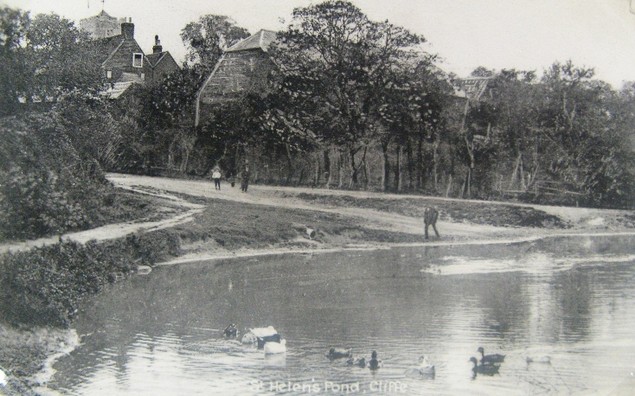 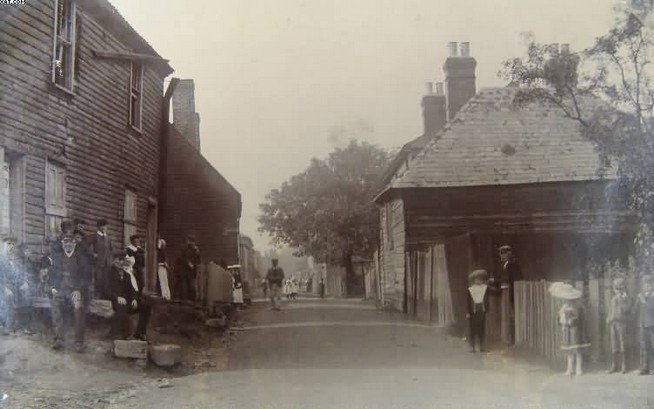 1949
March. To avoid confusion with Hoo, our postal address was changed from “Cliffe-at-Hoo” to “Cliffe, Rochester.”
April. The death occurred of Mr. L. Oakey, who was not only present at the sinking of H.M.S. Victoria in 1893, and was at the Cape during the South African War, but, being recalled at the outbreak of the 1914 – 1918 war, was awarded the Medaille Militaine for services at Mons, and a certificate for gallantry with the R.N. division in 1915.
Following the departure of the Revd. J. N. Pratt, Rector for Cooling for 15 years, the parish of Cooling became linked with Cliffe, and in charge of the Rector of Cliffe (Canon F. S. Gammon).
1950
Spending a holiday in Cliffe which he left 27 years ago when he sailed for Australia, Mr. Walter Loft said the biggest change he noticed in Cliffe was caused by the chalk excavations. “Fields I used to play in as a boy are now one big hole” he said.
1952
While bird-watching in Cliffe on Easter Monday, two Cliffe men, Mr. R. Hutchings and Mr. L. Batchelor, jun. Saw a moustached warbler, a very rare visitor to these shores. It was under observation for half an hour. This is only the fifth recorded occasion on which this bird has been seen in this country since its first appearance in 1916.
June. The death occurred of Mrs. L. P. Ward, who was for 60 years a member of the church choir. She was also a founder member of the W.I.
August. Death of Mr. A. G. Batchelor of Gattons. He was a well-known farmer, a churchwarden, and one-time member of the Parish Council.
September. Sheep-dog trials were held for the first time in the district at Cooling marshes.
December. The 250 year old weather vane on the roof of the Parish Church was takendown and repainted – the first time for nearly 60 years.
1953
February. Floods which affected much of the east coast on 3rd February, submerged the marshes both at Cliffe and Cooling. People residing at the Coastguard Cottages were evacuated, and hundreds of sheep had to be rescued. Collections throughout the village to aid sufferers from the floods realised £69. For work carried out in connection with the floods Sub-Officer J. Witherden received Queen’s commendation for brave conduct. 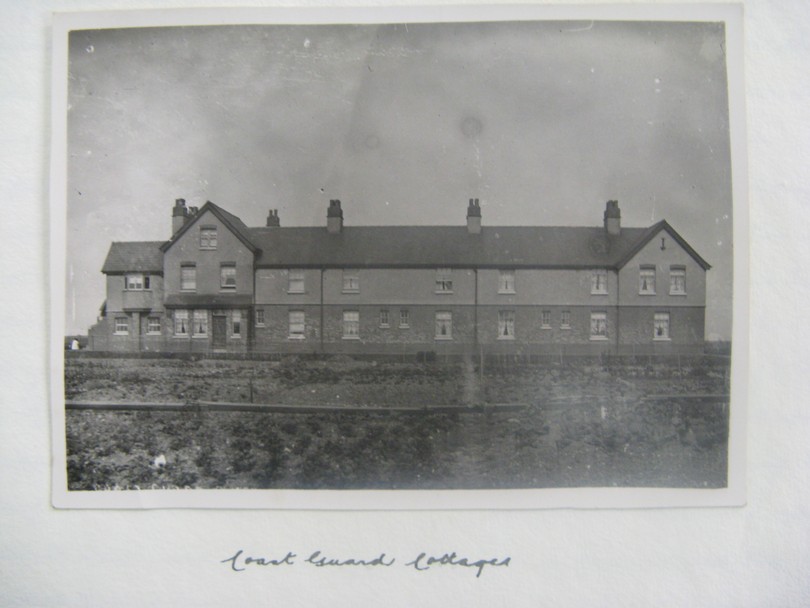 The Coastguard Cottages.
The Coronation of Her Majesty Queen Elizabeth II June, 1953
A week of revelry was given a good start by the performance of a “Coronation Pageant” by the children of the C. P. Infants’ School, under the guidance of the headmistress, Miss Goodwin, and Mrs. N. Evenden, assistant mistress who had written the pageant especially for the occasion.
One day pupils of Miss Crickmore’s School of Dancing gave a wonderfully colourful display, and another evening was given over to a Camp Fire and Revels by the scouts, Cubs and Guides.
The highlight of the Women’s Institute concert which occupied another evening was the finale “This England” performed in a setting of rose-covered trelliswork, and included the singing of “The English Rose”, “Rose of England”, “England” and “Long live Elizabeth”, interspersed with the appearance of Queen Elizabeth I and Victoria, and concluding with the recitation of “Our Gracious Sovereign”.
The Parish Church Bellringers organised a Military Whilst Drive, and the week finished with a Carnival and Fete held on the Recreation Ground (arranged by the Memorial Hall Fund Committee) and a dance arranged by the Youth Club. In addition to a “Darby & Joan”Party, “street” parties were provided for all children residing in the village. At these parties each child received a souvenir of some sort, such as “Coronation” Crown-pieces, and also a book of information about the district, and given by the Strood Rural District Council. Children also received souvenir gifts from the Kent Education Committee – the older children spoons, and the younger ones beakers.
To commemorate the Coronation, the Girl Guides a seat on the recreation Ground, and the Scouts a wayside seat in Church Street. Residents of Norwood area installed electric lighting in their bus shelter at Norwood Corner and the Youth Club provided litter bins. 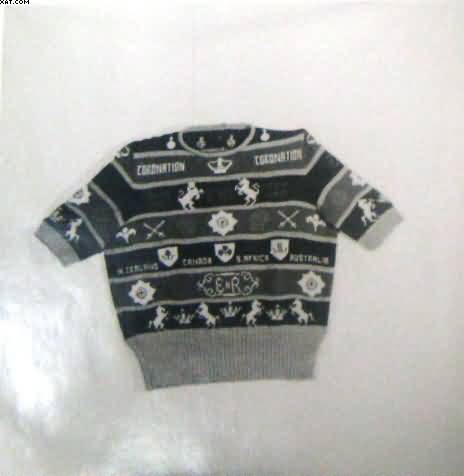 A beautiful knitted fine wool jumper designed and made by Miss Joan Smith, of Morning Cross Cottages, was a unique prize of “Coronation”handwork. As the illustration shows the design included the Royal Cypher, Britannia’s head, a lion and unicorn, garter-stars, crowns, orbs, swords, Tudor Roses, thistles, shamrocks and daffodils, as well as the words “Coronation, June, 1953, N. Ireland, Canada, S. Africa, Australia.”
1953
November. At the Brewers’ and Allied Traders’ Exhibition held in London, first place was gained by Mr. S Lane, of Quickrells Farm, and third place by Mr. W. R. Filmer, of Manor Farm. By coming first for malting barley in the Home Counties section, Mr. Lane’s entry went on to compete with winners of other sections from all over Great Britain and Ireland, and in this he emerged victorious, and was awarded the 250 guinea silver championship cup. Mr. Filmer received a diploma and bronze medal.
The Misses Rita Ayears, Gloria Batchelor and Shirley Richards, who help in the Parish Church Sunday School, attended Founder’s Day Festival of the Children’s Society at the Albert Hall, when Rita and Shirely presented purses to Princess Margaret.
The Queen’s Homecoming – 15th May, 1954.
Many villagers (and a lot of visitors) made their way across the marshes to watch the Royal Yacht, Britannia, travelling London-wars, bringing home H.M. The Queen and her husband and children after their journey to distant lands. 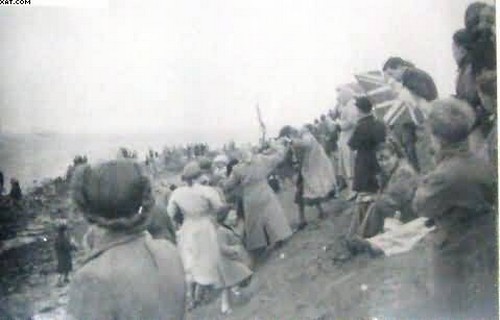 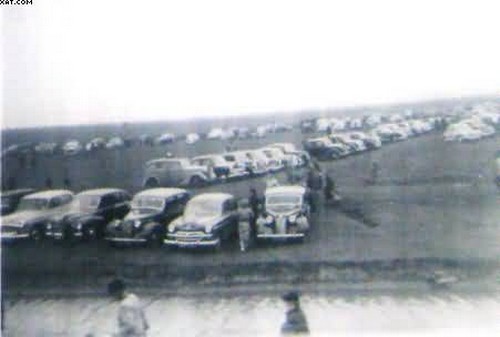 ....who came in their cars.
1954
January. Among the speakers at a meeting at the Methodist Church was Sir Richard Acland, Member of Parliament for Graves Division, of which Cliffe is part. The subject of his talk was “What Christ means to me.”
July. Although Cliffe Christian Mission has been in existence for more than 60 years, it only became registered for marriage this month, the first couple to be married there being Mr. R Fox and Miss Hagreen.
December. The death occurred of Mr. C. E. Rogers, for many years vice-chairman of the Parish Council, and a trustee of the Parochial Charities. He was also a circuit steward of the Methodist Church, and the founder of Cliffe Labour Party. At the Annual Parish meeting held the following March it was unanimously agreed that Mr.Rogers many years of public service be permanently commemorated.
The death also occurred of Mrs. B. Stanley, a keen committee member of Cliffe and Cooling Women’s Institute. Mrs. Stanley always took a great interest in amateur dramatics, and had taken part in plays performed by the Rochester Drama Griop, as well as those produced in the village.
1955
April. A seat was placed in the Recreation Ground to commemorate services rendered to the village by the late Mr. C. E. Rogers.
1957
November. Alternative premises in Church Street for use as Cliffe Post Office replaced those formally occupied in the High Street.
1961
December.
This ticket autographed by the Driver of passenger train, No. 31689, which made the last journey from Allhallows to Gravesend on a wet and windy Saturday night. 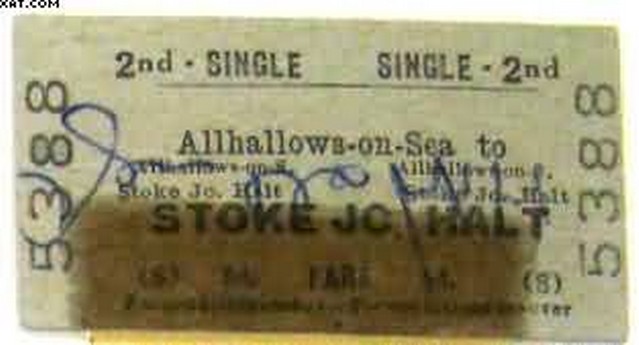 1963
March. After practising in Cliffe for nearly 50 years, Dr. Arthur Boolds Rogers died at the advanced age of 97 years. He was loved and respected throughout the village, retiring from practise in 1945.
1967
April. To celebrate the Coming-of-age of our Institute, a ‘sit-down’ party was arranged for this year. The twelve remaining Founder Members marked their pleasure at still belonging to the Institute by presenting new cups and saucers for use at the meetings. The Founder Mambers were also guests of the first President and Secretary on an outing to Lullingstone and Horton Kirby. Work was also started at the latter end of the year on a Banner for the Institute.
1968
June. Work commenced on the building of Cliffe Memorial Hall, and completion expected by Christmas.
June. The first Flower and Music Festival ever held at the Parish Church, with village exhibitions nearby. Mediaeval costumes worn by many.
Home | History | Places | People | Military Matters | Photos | Nearby Villages & Links | General Site Map
© 1993 - 2015 - Cliffe History
Back to content | Back to main menu