×
Nearby Villages & Links
Frindsbury by Edward Hasted
1797 AD
FRINDSBURY.
SOUTHWARD from Cowling lies FRINDS BURY, called in antient charters, Freondesbyri. It was likewise calledÆslingham, alias Frindsbury, from the manor of that name in this parish.
THE PARISH is situated adjoining to the river Medway, partly towards the south, and wholly eastward, it is near five miles from north to south, though not more than half as much in breath, the surface of it is a continued hill and dale, though it is in general high ground, the soil is various, but the hills are mostly chalk, the dales a loamy soil, and towards Hoo a stiff clay, all for the most part sertile corn land. The village adjoins to the town of Stroud on the north side, seemingly as part of it, from whence the ground rises pretty high to the summit of the hill on which the church stands, on the opposite side of the river to the city of Rochester, from which it is a conspicuous object. At the north end of the street of Frindsbury the road branches off on the left hand to Cliff and Higham, and strait forward leads on to the Hundred of Hoo, on which, at a mile's distance, is Wainscott, and further on Chattenden, both mentioned hereafter; and at the north-west boundary of the parish, next to Cliff, the manor of Æslingham. The high London road runs along the southern part of this parish for near a mile westward, beyond the pond called St. Thomas's watering place, at a small distance from which, on the opposite side, there has been a shewy house, built within these few years by Mr. David Day, who named it Little Hermitage; a quarter of a mile southward of the road, but nearer to Stroud, is Read-court, beyond which this parish extends to the hamlet called the Three Crouches, where the three parishes of Frindbury, Higham and Cobham meet. The parish joins to the river Medway from Stroud, along the shore opposite to Chatham-dock, where, on the hill is a house called the Quarry-house, having a beautiful view over the river, the town, dock-yard, and adjoining country, and till it joins the parish of Hoo, about half a mile below Upnor-castle northward, all along between the river and the hill are large quantities of falt marshes, overflowed at every high tide.
UPNOR-CASTLE is situated a small distance below Chatham-dock, on the opposite shore to it. It is a stone building, and was erected by queen Elizabeth, in her 3d year, for the desence of the river; but now, and indeed for many years past, there has not been a gun mounted in it for service, nor yet a platform. 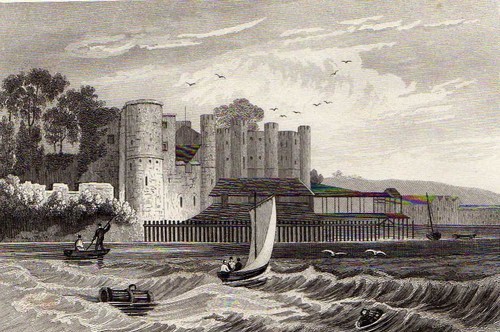