×
Places > St.Helen's Church
THE PARISH CHURCH OF CLIFFE AT HOO.
BY THE REV. lORWERTH GREY LLOYD, M.A.
A Paper read therein before the Kent Archaeological Society on July 26th, 1876,
The name of this parish was anciently Clyva, Cleve, or Bishop's Cleve; afterwards West Cliff, and Clyff, or Clyffe in the seventeenth century, as in the map of Kent in Philipott's book Kent Surveyed; and now the name generally given to the place is Cliffe-at-Hoo. Although the parish is not actually within the Hundred of Hoo, it is thus designated to distinguish it from others of the same name.
The Church is dedicated in honour of St. Helen, mother of the Emperor Constantine the Great, a personage chiefly remarkable on account of the legend, which represents her as the discoverer of the actual Cross upon which the Saviour suffered.
The Church which stood on the site of the present building, and which has entirely perished, with the exception possibly of a very rude and ancient doorway, still to be seen in the exterior of the north wall of the north Chapel, was, with some other buildings (to which it may be reasonably conjectured this doorway led, but which have also perished), (There is a raised space in the churchyard immediately opposite to this doorway, which would seem to mark the site of some building, and it has been asserted that there are foundations there.)the place where the seven Anglo-Saxon Councils were held, viz.:— Cloveshoo or Cloveshoe in A.D. 742, 747, 798, 800, 803, 823, and 824. The Canons passed at the Council of the year 747 are worthy of attention; one of them, the ninth, enjoining residence on the Clergy in their respective parishes, has been forgotten here, the present Rector being the first for fully a century, who has been properly resident upon the benefice.
Other places, it is true, claim to have been the scene of these Councils, but when the position of Cliffe is considered, geographically and ecclesiastically, being readily accessible by river and sea communication from all parts of England, and not so very far distant from the Metropolitical City of Canterbury, it -would seem to have as good, if not a better, claim than Abingdon, or Chelsea, to be the place where these assemblies were held. Besides this a priori argument in favour of the supposition, there is also more or less indirect evidence in its favour to be derived -from the fact that the Rectory of Cliffe (In ancient times there was a perpetual vicarage as well as a rectory belonging to this church, but when the vicarage was merged into the rectory is uncertain. The Vicarage House, which was probably built of timber and plaster, was pulled down shortly after the Restoration. Two fields belonging to the glebe still go by the name of the Vicarage field and marsh) was for many centuries an Exempt Jurisdiction, the Rectors having been their own Ordinaries, only visitable by the Archbishop of Canterbury in person. (This Jurisdiction was taken away by two "Orders in Council," dated respectively August 8, and December 23, 1845.) 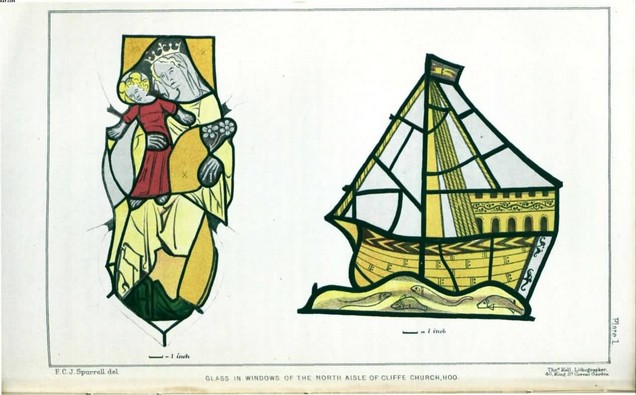 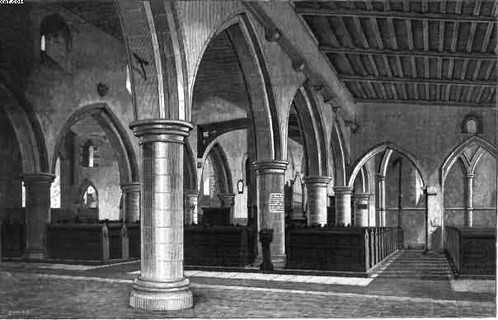 otherwise than it has been, viz., the defects made good with stones and cement, and the wall plastered to match the side walls. At the same time the ancient jambs of the east window were found in situ, built of Reigate stone much exfoliated. They were fifteen feet apart; and the sill of the window is seven feet above the level of the highest part of the chancel floor. The spaces between the ancient jambs, and the sides of the present miserable aperture, were found to be filled in with broken fragments of the beautiful "Decorated" window, which must have been something like the pattern, cut, with that intention, in the panel of the new Litany desk. This was copied from the beautiful " nameless window" mentioned by Rickman and Sharpe, and, as it is thoroughly congruent with the side windows, the "nameless window" may by a happy accident be the lost east window of Cliffe Church. The chancel was doubtless embattled like the rest of the church, until Rector Green perpetrated his Vandalism, leaving the upper courses of masonry all disordered, and so differing from the alternate courses of flint and rag in the lower part of the walls. The " rusticated" brick work on each side of the east window outside marks the width of the ancient window, the top of which would be considerably above the present roof.
The built-up doorway in the north side of the " sanctuary," opened into a vestry, similar to that at Stone, near Dartford. From the churchyard we see the corbels of its very low roof, as well as a piscina and an aumbrie, still remaining in the exterior of the chancel wall. The foundations of this building lie immediately below the turf and could readily be traced.
The Communion plate belonging to the Church is (with the exception of the paten) of no great interest. It is of massive silver, and comprises—flagon, chalice, and two salvers, and was presented to the Church by Rector Green. The paten, of pre-Reformation date, is of silver gilt and is enamelled. There is represented upon it the Father as "the Ancient of Days" enthroned, and supporting the Son hanging on the Cross, above the head of which is the Holy Dove, and round the rim is this
inscription:—
" BENEDICAMUS PATREM ET FILIUM CUM SPIRITU SANCTO."
It has been engraved for the Instrumenta Ecclesiastica of the Camden Society.
The Registers date from the year 1558, and the more ancient ones have been newly bound at the cost of the present Rector.
The churchyard is very large, being about two acres in extent, and has in it some wrecks of ancient elm trees; but it contains, so far as is known, no memorials of any historic interest. At its east end there are some ancient timber houses, formerly occupied by the priests of the chantries within the
Church. They passed into lay hands at the Reformation, and having been long used as "Poor Houses," have been again sold. There is an interesting window belonging to one of them visible from the street. (The village green adjoining the churchyard on the south goes by the name of the Butt-way, and is probably an unenclosed portion of the area upon which the parish butts were set up in the days when the use of the long-bow was obligatory upon every able-bodied free-man below the rank of Knight or Esquire. The archery practice generally took place on Sundays and Holy Days after Divine Service.) Of monuments in the Church, there is in the nave a stone, probably a coffin lid, bearing this inscription:—
" IONE LA FEMME JOHAN RAM GYST
" ICI, DEU DE SA ALME EIT MERCI."
There is also a beautiful slab with a floriated cross, and another of a more simple design, both without any legend, also a very large wedge-shaped stone without inscription. In the north
aisle there is a large slab of Reigate stone inscribed—
" ELIENORE DE CLIVE GIST ICI. DEU SA ALME EIT MERCI. AMEN PAR CHARITE.”
With a half-length figure of Elienore. This is figured in the Gentleman's Magazine of 1794, plate iii., page 809. This monument is now unavoidably concealed by the new seats. There are also some seventeenth century brasses for the family of Faunce; one of the series is missing.

(Here lyeth the body of Thomas Faunce yeoman, who had two wives Alyce & Elizabeth & had issue by Alyce 2 sones and one daughter & by Elizabeth one sonne and 2 Daughters. The sayd Thomas Deceased yc first day of July 1609 beinge of y° age of LXXXllH yeres : and Alyce dyed ye first daye of Marche 1592 being aged LXifi yeres : Thomas His eldest son'e by Alyce being Mayor of y° cittie of Eochester at his Fathers decease. Here under lyeth interred the body of Bonham Faunce late of this parish Gent: aged 66 : Hee had issue by his two wives Elizabeth and Mary eich of them one childe; Hee dyed the 16 day of February 1652.)

In the south aisle there is a very late brass for Elizabeth Gissome, (Heare lyeth the body of Elizabeth Gissome late wife of James Gissome of this parrish who departed this life the 14 day of November 1668 being aged 19 yeares & 10 moneths Vivit post funere virtus.) also a stone for the Baynards (Here lyeth the body of Richard Baynard who departed this life May day 1672 aged 4(1 years. Here lyeth the body of Dorryti Baynard late wife of John Baynard of this parish who departed this life ye 21 day of September 1667. Also here lyeth the body of Richard Baynard sone of John and Dorryti Baynard who departed this life March 17th 1671 aged 8 years. Here lyeth the body of John Baynard Husband to Dorryti Baynard and father to Richard Baynard who departed this life May 7th 1676 aged 56 yeares.)  of this parish; and on either side of the east end of the nave there are modern tablets erected by the parishioners in memory of Rectors Simpkinson and Burney. There is also on the eastern respond of the south arcade a brass plate which records the gift by John Brown of certain lands to the school in the year 1699.
In the chancel are two large stones with the matrices of their brasses, evidently in memory of ecclesiastics—probably Eectors of the parish, but who they were it is impossible to say. In one of the Register books the burial of Mrs. Annesley, the wife of the intruded Rector, in the time of the great Rebellion, is recorded as having been effected to the east of the largest of these two stones. Just east of the organ is a slab of Bethersden marble, much defaced by time, and with no legend; also there is another with the matrix of a small half length brass of an ecclesiastic, under the tiles in the middle of the chancel between the choir-seats. It was so shattered that it was left as it was, and the levelling for the tiles just allowed them to cover it and the stone above mentioned. There are also to be seen outside the Church under the foundation of the west wall of the south aisle some pieces of ancient gravestones, which have evidently been improperly diverted from their original purpose into foundation stones.
In conclusion, it is to be hoped that many years will not elapse before Cliffe Church, one of the largest and most interesting in West Kent, shall have undergone a thorough restoration; which, however, must be a work of very considerable cost, it being roughly estimated that it would take from £1500 to £3000 to complete the satisfactory restoration of the chancel; and at the very least from £3000 to £4000 that of the nave and aisles. And as Cliffe is now, owing to the establishment of Cement Works, recovering rapidly from the decay which overtook it after the fire, by which the greater part of the town, as it then was, was destroyed some three hundred years ago, there seems every prospect that its noble Church may again become as highly appreciated by a large and devout congregation (illuminated, however, by a purer and more primitive Faith), as it ever was in its earliest and best days of construction and enlargement.
Reproduced by kind permission of the Kent Archaeological Society.
Home | History | Places | People | Military Matters | Photos | Nearby Villages & Links | General Site Map
© 1993 - 2015 - Cliffe History
Back to content | Back to main menu