×
People
Ted and Jack Crane
The Crane Family of Cliffe
When you walk along Reed Street today it may be difficult to imagine that this area of Cliffe was once known as Cliffe Market. At the turn of the last century Cliffe had many shops and tradesman serving the community.
Travelling eastwards, passing North Road, there once stood a number of stores which included: William Joyce, the butcher and grocer, Walter Frayling, a draper, clothier, general outfitter, boot provider, dress & mantle maker, milliner, and mourning warehouseman; whose speciality was bespoke tailoring, James Alston Collins, grocer, hardware dealer, oilman, tobacconist, glass, china and earthenware merchant, Charles Beaumont, confectioner and Walter Reeve, builder, decorator & undertaker.
In the High Street, between the Bull Inn and the Six Bells, there was also a post office, fishmonger, harness maker, doctor, builder, shoemakers, cycle maker, butcher, grazier, haberdashery, tobacconist, hairdresser, stables, bookseller, newsagent, confectioner, baker, general stores and tailor.
Further along Church Street there other shops to cater for the everyday needs of the village which included a butcher’s shop owned and run by Thomas Charles Crane and family.
T.C. Crane - Family Butchers (1st Prize at Rochester Show 1903)
Thomas Charles Crane moved to Cliffe from Cooling in 1891 along with his wife, Emma, and their seven children one of whom was a fourteen year old Thomas Charles Crane Jnr. who worked alongside his father in the butcher’s shop.
Thomas Charles Crane Senior at Allens Farm c. 1900
The Crane family move into Allen’s Farm where Thomas Charles Crane raises cattle – probably for use in his own butcher’s shop where Elizabeth, the eldest daughter is employed as a butcher’s clerk and sixteen year old Edwin works on his father’s farm. 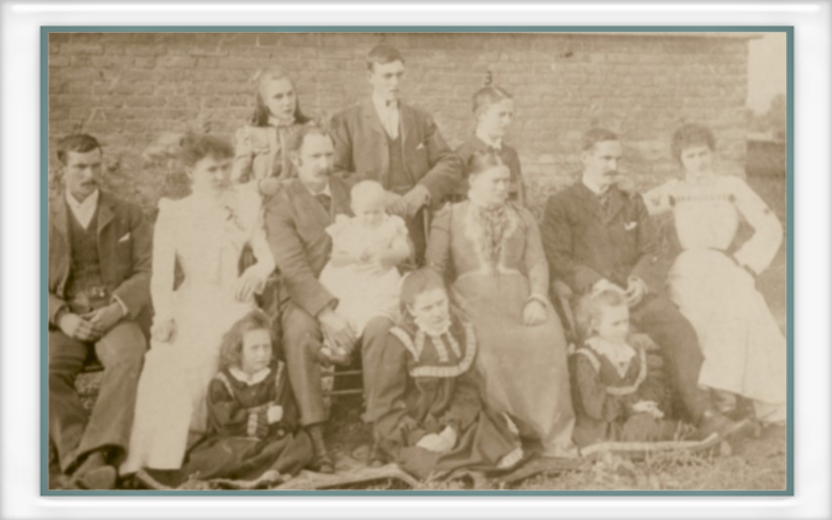 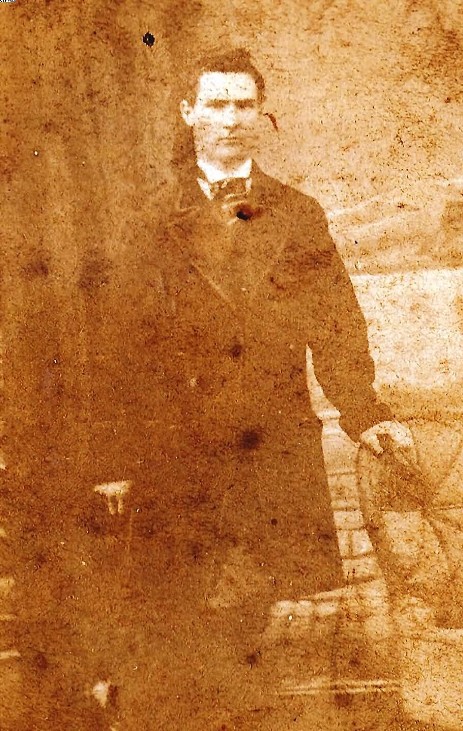 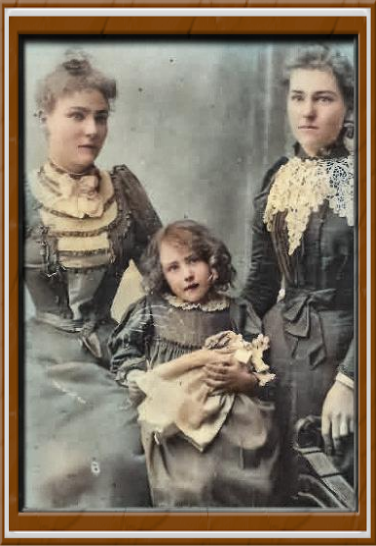 Three of the eleven children of Thomas Charles and Emma Jane Crane:
Emma Jane Jnr., Florence and Mabel.
The Move to Australia
We are not completely certain for the decision but the Crane family, over a period of a couple of years, left England to begin a new life on the other side of the world.
Certainly Thomas Charles Crane was a highly respected man in the village - when he and family left he was a Parish Councillor, a Schools’ Manager, Charity Trustee and People’s Churchwarden, and was presented with an inscribed silver watch, and a purse of gold (£35) subscribed for by his many friends.
The Crane family (all except son Henry) migrated to Australia between 1910 and early 1912.  Son Edwin (Ted) was first to leave the UK in July 1910 with his wife and young son Albert Edwin Charles: fondly known as Ted, then Willie (March 1911), Tom and family (July 1911) and Edith Rose (August 1911). Thomas Charles Crane (Snr) along with his wife Emma Jane and daughters, Nellie, Jessie, Florence and Mabel together left the UK in November 1911.  Last to leave was Emma Jane and husband Frank (Thorndike) along with sister Elizabeth (Lil) and husband Bert Reade in late December 1911. Tickets were purchased for 15 pounds each and Frank, Emma, her sister Lil and husband Bert Reade boarded the SS Geelong for a journey of 11,810 miles to Brisbane, Australia.   Leaving Tilbury UK on 28th December 1911 they arrived safely in Adelaide 8th February 1912 continuing on to Sydney. 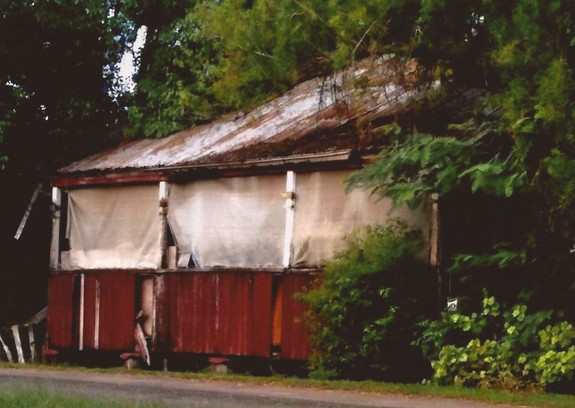 After leaving Cliffe and the relative splendour of Allens Farm the Crane family moved into what can only be described as a shack!
The family home was now in Nanango, Queensland to the north-west of Brisbane. Nanango Shire was originally inhabited by the Aborigines. They used it (primarily) as a gateway into the Bunya Mountains, where Bunya pine nut festivals had been celebrated ever since the Dreamtime.
In 1866 gold was discovered and the following 'gold rush' lasted from 1866 until 1888. Today, along the 7 mile diggings Traces of gold and gemstones including red garnet and opaque sapphires can still be found.
Frank and Emma disembarked at Sydney making their way to Dungog, a country town in mid NSW working there on a farm for a time.  Lil and Bert continued to Brisbane on the “Wyandra” arriving 24th February 1912 and then moved on to Nanango in country Queensland where most of the family had made their way to begin dairying in February 1912. The Crane family had raised cattle in UK and owned a local butchery in Cliffe UK so the industry was familiar to them however the vastness of the area they now lived in must have taken a huge adjustment.
Nanango is one of Queensland's oldest towns and has a unique heritage and colourful past. Situated approximately 131km (81 miles) north west of Brisbane the journey takes around 2 hours comfortably by car.  It would have been a far different story in the early 1900’s though the area was opening up and growing considerably.  Nanango today is the home of the Tarong Power Station and Coal Mine and has retained the tranquil and beautiful setting of a country town with all businesses offering genuine country hospitality.
Lil’s husband Bert sadly passed away in Nanango in 1913 at the age of 33 yrs.  She remarried to Albert Strange in Apr 1916 and they purchased property in Brisbane at 26 Thomas Street Greenslopes building a house there.  The house was called “St Georges” named after “St Georges Row” where the Crane family had lived in Cliffe, England.  “St Georges” was later to become the Thorndike family home.
Moving on from Dungog approx 1913 Frank and Emma joined her family in Nanango where they lived and worked, Frank continuing as a butcher (occupation recorded on his enlistment papers) and farmer (listed on young Frank’s birth certificate). After the sadness of losing their little daughter in 1902 it was another 12 years before son Frank (Frank Jnr) was born on 2nd August 1914. It was a joyful time in their lives and young Frank was much loved.  He was an only child and grew up hearing many stories of family life back in Cliffe, Kent.  Emma had worked in the Manor House and told stories of secret tunnels, some from the Manor House to the church down the lane, lights signalling in the windows to smugglers operating the area and other scary things. There was much correspondence with other siblings and relatives and friends, including Frank’s mother Anne in the Victory Inn. Frank Jnr always had a desire to go and visit Cliffe and see for himself the places they had talked about so often.  It wasn’t until his 80th year in 1994 that his dream was realised and he visited England in person with son and daughter in law, Roley and Claire.  It was a great joy to meet some relatives and to see for himself the old haunts of his parents.
Frank and Emma purchased a property to dairyfarm just outside of Nanango named “Illawarra” where they milked a herd of the Australian Illawarra Shorthorns.  Emma’s father Thomas also farmed and milked this same breed. Adjacent to their property was Mabel (Emma’s sister) and her husband Ben’s farm, also dairy, named “Glan Devon”.
The Crane family in Australia
Ted & Lil Crane and family
Ted and Lil were soon to have a daughter, Hilda Mabel (Kitty), born 1912, and in 1917, a young son, John William (Jack) completed the family.
In June 1941 both Ted and Jack enlisted in the Australian Imperial Force (AIF) and sailed off to Singapore and Malaya early in 1942.
Ted and Jack arrived in Singapore at the end of January – just a few days before the Japanese attack which saw over 100,000 prisoners taken.
On 16th February the Crane family heard that both Ted and Jack were reported as missing and then later as prisoners of war. Their fate was to be used as forced labour on the infamous Burma-Thailand railway made famous by the book and film '
Bridge over the River Kwai
'.
The horrors of how the Japanese prisoners of war were treated, although now all to apparent, was unknown at the time and it is supposed that Ted and Lil were waiting for the end of the war to see the return of their two sons.
The living and working conditions on the Burma Railway were horrific. The estimated total number of civilian labourers and POWs who died during construction varies considerably, but the Australian Government figures suggest that of the 330,000 people that worked on the line (including 250,000 Asian labourers and 61,000 Allied POWs) about 90,000 of the labourers and about 16,000 Allied prisoners died.
In May 1943 they heard that their youngest son, Jack, had died from cholera and, a couple of days before Christmas on 23rd December in the same year, that Ted had succumbed to  dysentery. 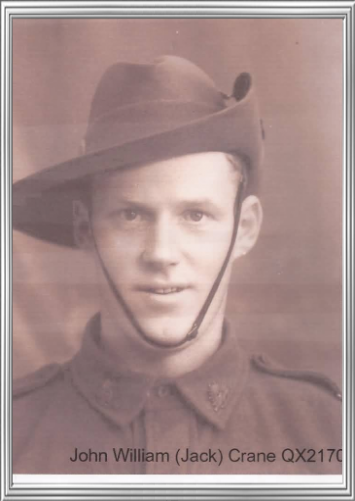 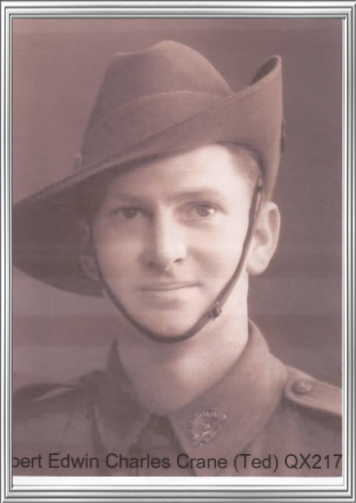 The boys had been buried where they fell but, at the end of the war, the Army Graves Service reburied many of the fallen. Jack was buried at Thanbyuzayat War Cemetery and Ted at Kanchanaburi War Cemetry.
One can only wonder how Edwin and Lil must have suffered in the not knowing and then in the deaths and non-return of their two sons. It is said that the circumstances surrounding their deaths left their sister Kitty heartbroken and it affected her all her life.
It was not until 2009 that a member of the family managed to visit the grave of Ted Crane. After attending a service of remembrance at Kanchanburi War Cemetery and given ten minutes to ‘look around’, Peter Thorndike, stumbled upon his great uncle Ted’s grave. 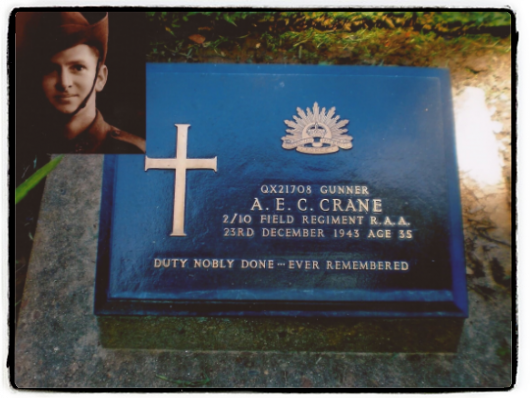 Although, as a Cliffe born boy, Ted is not commemorated on the Cliffe War Memorial both he and his younger brother have their names inscribed upon the war memorial in Nanango.
We would like to express our sincere thanks to the Thorndike and Gilbert familes, both here and in Australia, who have allowed us to share their stories.
Home | History | Places | People | Military Matters | Photos | Nearby Villages & Links | General Site Map
© 1993 - 2015 - Cliffe History
Back to content | Back to main menu